skip to main | skip to sidebar

“I could never live in London.” You hear that a lot from people who don’t live in London. I think I used to say it too. But then, shortly after I moved here, I realised that the London I didn’t want to live in was a conflation of Piccadilly Circus, Oxford Street and Trafalgar Square at rush hour. I imagined fumbling for my house keys while irate commuters yelled at me to get out of their way. No, I definitely couldn’t live there.
Then shortly after I moved here, I realised that it was no more tenable a position to hold than, say, never eating vegetables. London isn’t one place. It’s a hundred different places – all with their own character and concomitant character-types – lent a veneer of uniformity by... well, by what, exactly? A name? More than a name, I think the answer might lie in the London Underground map. If I close my eyes and imagine what the whole of London looks like, it’s Harry Beck’s iconic diagrammatic design that materialises before me. 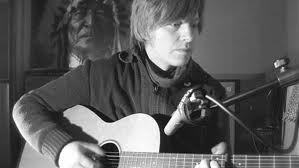 Over the years, I’ve emerged into daylight at enough stations – driven and cycled past many more – to be able to describe the places behind the names.  Southgate is a bustling post-war throwback, where mums flit from grocer to hardware store to post office, maybe stopping for a cup of tea at the Wimpy located opposite the art deco Tesla coil of Charles Holden’s circular ticket hall. Some, however, remain mysterious. After I misread it for the first time, Acton Town will always be Action Town to me. I never want to find out how much action really goes on there. I made that mistake with Hillingdon. Seduced by the shiny white steel construction of the tube station that sits on the side of the A40, I took the Metropolitan line westwards to see the English settlement tucked behind it. I wished I hadn’t bothered. It may have won the award for Underground Station Of The Year in 1994, but up close, the station was grotty and weatherbeaten. A bridge connecting it to the main town was unloved and unloveable – a functional satellite town with no clear sense of its own identity.
But as long as you don’t know London, you can imagine it. And the names of so many stations, exhort you to do just that. Burnt Oak. Chalfont & Latimer. Theydon Bois. Mudchute. Sitting on the interminable prong of Piccadilly Line that stretches out towards Heathrow, there’s not much else to do. That’s how I like to imagine Anglesey-raised  Carwyn Ellis writing Turnham Green – the b-side to Colorama's 2008 debut seven-inch Sound. Certainly, the name begs to be alchemised into a song. The question in this case, is what took someone so long to get around to it? How could the entire late 60s pass – an era which saw The Kinks, The Bee Gees, Syd Barrett, David Bowie, The Zombies and, of course, The Beatles looking at their metropolitan surroundings with dilated pupils – without someone noticing the lysergic ambiguities of a name like that? Ellis wasn’t quite the first (there’s a dreary Turnham Green by some long-forgotten indie plodders called The Perishers) but when you’re compiling your hypothetical tube stop pop comp it’s hard to think of a more perfect opener than this one, with its slow, sonic establishing shot of cymbal-scrapes and unresolved sitar noise. 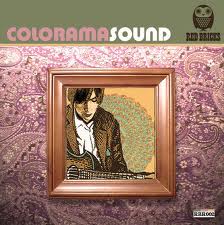 This is soft psychedelia for wet, windless mornings measured out in waltz-time. Pastel-toned shades of The High Llamas abound in Ellis’s languorous delivery. Unlike Sean O’Hagan though, Ellis forsakes any audible debt to The Beach Boys in favour of something closer to home. Subconsciously, Ellis may have been aiming for a feel more akin to Donovan’s Sunny Goodge St. That would explain the woodwind and the sleepy syncopated brush-strokes. In Donovan’s 1965 song though, you’re propelled to the heart of the midnight circus: the “violent hash-smoker [shaking] the chocolate machine... smashing into neon streets”; “doll house rooms with coloured lights swingin’.” You can’t listen to Sunny Goodge St without getting nostalgic for a swinging London you were never old enough to experience.
Back in Zone 3, however, London’s swing is something more akin to the gentle sway of a suspended tyre in a deserted playground. “Any train is good for me,” sings Ellis in the manner of someone more preoccupied with getting warm than getting somewhere. Ultimately though, I suspect he didn’t dwell too long on the words. There’s nothing described by here that isn’t encapsulated by the leisurely flutter of flute and piano around an ascending chord sequence which apes the sensation of waiting for something, waiting for anything to happen.
Finally, all music gives way to a rolling stock rattle which, in turn, fades into the distance. Once the commuters have finished commuting, Turnham Green’s work is done. Peak hours only. Quiet, isn’t it? This is the sound of the suburbs.
Posted by Pete Paphides at 15:45 4 comments 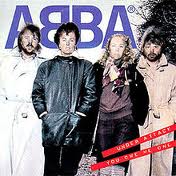 Even at the age of 13, I knew something was up with Abba as they embarked on promotional duties for their career-spanning hits compilation: The First Ten Years. Only three years had elapsed since Greatest Hits Vol II, but here they were on Saturday Superstore and Noel Edmonds’ Late Late Breakfast Show trying to suppress their boredom with a barrage of questions they had answered a million times before. In Abba The Movie, Agnetha fulfils the same role as Thom Yorke does in Radiohead movie Meeting People Is Easy. The more the madness intensifies around her, the more lost she looks. How ironic that the boys gave Super Trouper to Frida. Cocooned in premium patterned knitwear, she doesn’t remotely like she was sick and tired of everything when she calling you last night from Glasgow. Perhaps Agnetha couldn’t get through the first verse without bursting into tears. Or exploding with fury. Certainly, back on the Late Late Breakfast Show with Noel, it looked like it might go either way. Referring back to the time that the European press corps voted her the continent’s sexiest bottom, she icily intoned, “I’m more than a sexy bottom.” Asked to pick his favourite Abba song, Björn seemed equally enervated by the whole charade. “I’d like to pick The Winner Takes It All. Partly because I was told [beforehand] this was to be my choice.” 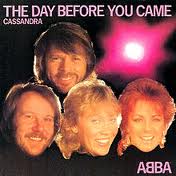 In fact, the very existence of The First Ten Years was a testament to Abba’s slow deceleration into a state of limbo from which they never emerged. The previous two years, Abba had delivered a new studio album in time for Christmas. Throughout the early part of 1982, Abba worked on songs for the album that has come to be known by their fans as Opus 10. They appear to have completed six before calling time on the sessions. Two of those songs made it onto The First Ten Years. Under Attack holds the honour of being Abba’s final single – although the one that most people remember being Abba’s farewell is The Day Before You Came. Well, it isn’t hard to see why. The blood-curdling portent with which Agnetha delivered her vocal on that song seemed to harbour a pop mystery as enduring as the identity of the subject of Carly Simon’s You’re So Vain. So, what happened the day after this guy came? Whatever it is, it’s not good is it?
Interviewing Bjorn in 2010, I got the chance to ask him directly. “Ah, you’ve spotted it, haven’t you?” he said. “The music is hinting at it. You can tell in that song that we were straining towards musical theatre. We really got Agnetha to act the part of the person in that song. In retrospect, it might have been too much of a change for a lot of Abba fans. The energy had gone.”
His point was well made. In the 80s, Abba no longer knew what direction they were supposed to be going in. Their magpie-like adoption of whatever was happening around them – the Roy Wood-inspired glam-overload of Waterloo; the pristine Chic inflections of If It Wasn’t For The Nights; the post-Moroder arpeggiations of Lay All Your Love On Me – abandoned them. Like ELO, the digital age miniaturized their sound. Their music didn’t deteriorate, but in those final years, they struggled to sound like Abba.
The search for new directions was embodied in the b-sides of those final two singles. Bjorn had moved to Henley Upon Thames with his new wife. He had befriended Tim Rice and, along with Benny, rather fancied a crack at writing a proper musical. Cassandra, on the flipside of The Day Before You Came, also sounds like the work of two songwriters “straining towards musical theatre”. Singing about the eponymous prophetess of the Trojan war in a challenging time-signature is Frida – though, having spent the previous five years gazing at Abba’s schedule with an increasing sense of dread, Agnetha might have been a better fit for the song.


Save for Frida’s new punky hairdo, Abba’s biggest concession to changing times was Benny’s total jettisoning of piano for synths. Cassandra sounded like an old Abba song struggling to get comfortable in its high-waisted lady-slacks. On the b-side of Under Attack, You Owe Me One was much more fun. In his book, Abba – The Complete Recording Sessions, Abba’s chronicler-in-chief Carl Magnus Palm begs to differ. He refers to the song as the “least attractive” of these sessions. It might have seemed that way, but nearly three decades later, You Owe Me One stands apart from pretty much anything else in Abba’s canon. Like Palm, you suspect that having written it, Benny and Bjorn couldn’t quite work out what it was. The chorus is pure bubblegum. “Aha, um hum/Look what you’ve done/I’m missing all the fun/Baby you owe me one,” sings Frida, declaring to her lover that she has earned the right to flee an intolerably joyless relationship. Perhaps this was what being in Abba felt like in 1982. Perhaps, it was a relief to finally say it. Certainly, You Owe Me One is lightweight in the best possible way. If you could visualize what the tune does, you might imagine its odd sudden turns taking on a PacMan like quality. This is the catchiness you remember from old Atari games, accentuated in a vocal which is far more in keeping with the fluorescent colours of J-Pop than the long shadows of Abba’s final two albums.

Of course, another reason You Owe Me One sounds ahead of its time is that, over 20 years, a lot of pop was beginning to sound like this. The term “wonky pop” was coined by Popjustice’s Peter Robinson to describe the wave of mainstream pop boffins – Calvin Harris, Alphabeat, Frankmusic, Annie – who emerged in the slipstream of Girls Aloud. You Owe Me One could have easily emerged from the huge communal pop brain of Xenomania. Neither would it be any great stretch to imagine , say, Richard X retooling it for the needs of a pop audience who had yet to be born when it first appeared. For all of that, Benny seemed less sure when I asked him about the song. “It shouldn’t have even been a b-side,” he said, after pausing to remember how it went. “It’s a jingle, really.” He’s not wrong, but then again, inside every great pop moment, there lurks “just a jingle.”
Posted by Pete Paphides at 12:38 10 comments